There is no casino, unmarried couples are allowed to stay in the same hotel room, women can wear a bikini at the beach, a plate of shawarma will set you back $3, a bottle of coke costs about $1, and hotels are already gearing up to serve kosher food. Here are all the do’s and don’ts from our visit to Abu Dhabi.
It’s finally happening. Israelis can formally pack their bags and go on vacation in the UAE. There are only a few security measures you need to adhere to, and as-salamu alaykum, fly safely. But before you do, it is worthwhile, maybe even necessary, to know how to conduct yourselves while in the Emirates.
The UAE, made up of 7 emirates, is a fascinating blend between the modern and traditional. The modern poses no real problem. With the traditional, however, one needs to know how to behave. The rules of conduct are very clear, and not to be trifled with. Here’s what we learned on our visit to Abu Dhabi.

Alcohol: Drinks can be freely consumed only in bars, restaurants and private residencies. It is strictly forbidden to drink beer on the street.

Wearing masks: As required by law, everyone in the UAE, without exception, properly cover their mouth and nose with a mask. If you don’t, expect to be fined as much as $1000, and there is no point arguing with the police. Arguing in general is not advisable, neither with cops nor with store clerks.

Casino: Nope. Gambling is illegal in the UAE.

Drugs: Possession and use of drugs are among the most serious criminal offenses, subject to heavy penalties.

Personal Safety: Since I arrived here as part of an official Israeli delegation and was constantly accompanied by two squad cars (front and rear), and possibly a few more unmarked cars, it is difficult for me to give my qualified opinion, but my overall feeling is that the UAE is as safe as can be, if you obey the rules, that is.

The beach: Wearing a bikini is allowed, but sunbathing topless is a definite no-no. And remember not to walk back from the beach to your hotel in a bikini. Tank tops, shorts and tight clothes are also unacceptable, not in shopping centers and certainly not at religious sites. Some of the beaches have clearly marked areas for families and for couples.

Abu Dhabi, first impressions: They say that Abu Dhabi is Jerusalem, while Dubai is Tel Aviv. Well, I haven’t been to Dubai yet (emphasis on yet), but Abu Dhabi did not feel like Jerusalem to me, and I am a former Jerusalemite. The view outside the airport and beyond doesn’t really scream “posh”. The monotonous desert scenery changes closer to downtown and the beach. Only then did we see the hallmarks of great wealth – skyscrapers draped in glass, standing tall one after the other and twinkling in the sun. One of them, clad in golden-bronze glass, was the set for some scenes from Furious 7. Along the beach, there is a beautifully manicured promenade. Here and there you can see people enjoying water sports, while others bathe in the Arabian Sea. The treets are enviably spotless, much like the luxury cars that zipped by.

People: There are hardly any passersby on the streets, definitely not in the early afternoon, and not because of the scorching sun. Our tour guide was Shakir Ashraf (born in India), who explained that most residents of Abu Dhabi are hard at work, at least until 5PM. Out of the 1.5 million Abu Dhabi residents, around 82 percent are migrant workers – foreigners from about 200 different nationalities, who came here to work for the local emirate minority. That’s what happens when you have loads of money – there’s always someone to do the work for you, and many of them flock to Abu Dhabi.

Shopping: Abu Dhabi has a wide range of prices, from market stalls to fancy malls with every possible brand. One of the largest shopping centers in the city is the Yes Mall. You can also get a VAT refund of 5% at Abu Dhabi International Airport.

Attractions: Abu Dhabi is not the glamorous and attraction-filled Dubai, but there is no shortage of things to see and do. You can visit the local branches of the Louvre Museum the Guggenheim Museum, for example. Motor enthusiasts shouldn’t miss the world’s largest indoor Ferrari Park, while the biggest draw is definitely the Sheikh Zayed Grand Mosque, which is one of the largest and most magnificent in the world.

Chic Sheikhs: It is impossible to visit the Persian Gulf and not talk about handsome sheikhs in white jellabiyas. Everywhere you go, you’ll see huge billboard pictures of Sheikh Zayed bin Sultan Al Nahyan, the first president of the UAE.
The largest mosque in the UAE, and one of the largest and most magnificent mosques in the world, is named after the former ruler. It is definitely a must-see, with its impressive architecture and many minarets and domes adorned with marble and gold. Admission is free, but due to COVID-19 the mosque is currently closed to visitors. Until it opens, you can always take a selfie against the facade.

Accommodation: Abu Dhabi has plenty of hotels in every price bracket. Our digs were part of Rotana Hotels, a huge resort built about two years ago, with rooms starting at around 844 AED (around $230) per night for a room with breakfast. And if money is no object, you can also splash out on the presidential suite, for a mere 15,000 AED (around $4000) a night.

Kosher food: Hotels in the city are gearing up to serve their Jewish customers, and our hotel was no exception, so we enjoyed delicious and varied kosher food.

What else is there to see and do in Abu Dhabi? This is what a local tour guide, Shakir Ashraf, told us:

Thank you for flying Etihad

Etihad Airways: The second national carrier of the UAE launched (last Monday) its first commercial flight from Ben Gurion Airport to Abu Dhabi, carrying an Israeli delegation. Although the company does not yet operate its daily nonstop flights to Tel Aviv (hopefully soon), it doesn’t hurt to know that Etihad Airways is considered to be one of the best airlines in the world. Judging by the smiling and gracious flight attendants, the food in business class and the generous leg room in economy, it is certainly understandable why this company reaps so many awards.
Flight tickets: Etihad recently launched a website in Hebrew, and though its fares have not yet been published, it is estimated that a return ticket will cost about $400. However, Tal Aviation announced just last week that flights tickets from Tel Aviv to Abu Dhabi with Etihad Airways will cost from $859.
Flight time: About two and a half hours.
Flight route: Over Saudi Arabia and Bahrain, thanks to our recent normalization of ties.
Abu Dhabi Airport: A modern, clean and easy-to-navigate terminal. The control tower, by the way, is built in the shape of a crescent, an architectural marvel in and of itself.
Corona guidelines: After filling out a health declaration right before landing (and submitting it to the flight attendant), you go through full disinfection at the terminal. Yes, you got that right. You enter some kind of device that blows disinfectant vapors on you. I would suggest you close your eyes and wait it out. It takes a few seconds and then you’re squeaky clean.
Next, you get a plastic bag with a test tube and enter a cubicle to go through a COVID-19 test (nasal only). In my case, it almost swabbed my brain, but I survived. Results come in within 12 hours. At the moment, anyone entering Abu Dhabi must go through 14 days of isolation.

The writer was a guest of Maman Aviation and Etihad Airways in Abu Dhabi. 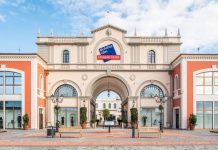 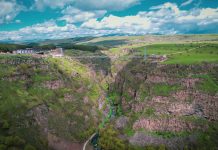 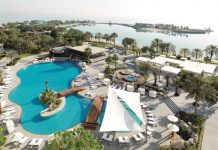 A slice of heaven at Ritz-Carlton Bahrain