The two carriers, already codesharing on routes between Belgrade and Istanbul, further expand their cooperation, with Air Serbia adding its JU marketing code on the Turkish Airlines’ low-cost brand AnadoluJet, flying between Ankara and Belgrade 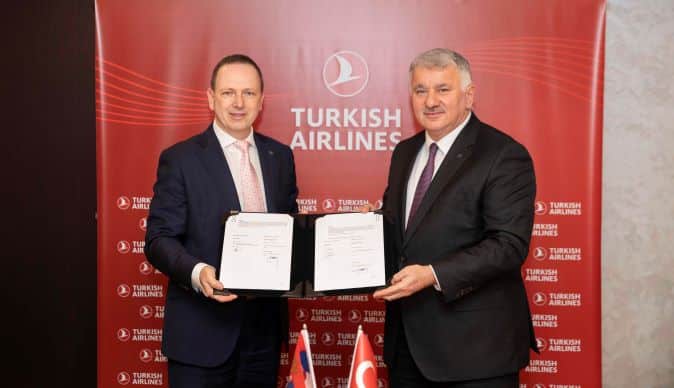 Turkish Airlines and Air Serbia announced yesterday (Sunday) the expansion of their commercial cooperation with a codeshare agreement to further destinations from both carriers’ networks. The enhanced codeshare agreement was officially signed in Istanbul by the two airlines’ CEOs, Bilal Ekşi and Jiří Marek.

With the complementary structure of timetables of both carriers, the reciprocal agreement will further allow both airlines’ customers to enjoy seamless connectivity in their respective hubs.

Both airlines already codeshare on the below:

According to Bilal Ekşi, Turkish Airlines’ CEO, “As Turkish Airlines, we are glad to expand our existing cooperation through this enhanced codeshare agreement with Air Serbia. With the introduction of new codeshare flights on several destinations in Serbia, Turkey, and the Balkans, passengers have started to benefit from an effective opportunity to enjoy more travel alternatives. We hope to provide further travel opportunities for our customers with enhanced bilateral rights in the forthcoming period. By this chance, I would like to thank Mr. Marek and his team for their efforts to put this enhancement into effect. Without a doubt, this step would also be a substantial added value for the bilateral relations of both countries.”

Jiří Marek, Air Serbia’s CEO, further added: “Improving our commercial cooperation with Turkish Airlines began in mid-2020, just a few months after the outbreak of the coronavirus pandemic, which completely changed air traffic. Despite the fact that we had to meet remotely, we managed to agree on extremely successful cooperation… between our hubs, which quickly expanded to additional points. It is a great honor for me that we can now sign the additional expansion of codeshare cooperation between the two companies in a direct way, by the meeting of the two CEOs, and thus formalize even better cooperation in the months and years to come, hopefully with the weakening of the pandemic and global recovery of air traffic.”